The battle of the flagship smartphones is quite obvious, with every year offering up new opponents for the crown of the best phone you can buy. Here we got Apple’s iPhone 13 and Samsung’s Galaxy S21, two of the most popular phones of the year. The Android (Galaxy S21) Vs iOS 13 – what to buy?

The Android (Galaxy S21) Vs iOS 13 – they both have smooth performance, high-end designs, and terrific cameras. They’re also similarly priced, with a starting price of $799.

When shopping for a new smartphone, comparing these two phones is something that’ll almost certainly come up. And that’s where we come in.

We’ve broken down both phones in key areas to highlight their strengths and weaknesses. Here’s what’s different between the devices and where each one thrives and disappoints.

Aside from them both being two slabs of metal and glass, there aren’t many design similarities between the Galaxy S21 and iPhone 13. Samsung is sticking with a bezel-less design complete with a hole-punch cutout for a selfie camera, while Apple leans on a notch that’s 20% smaller than its predecessors.

The backsides of both phones are very different, with Samsung opting for an upright camera bar that melts into the side of the phone. Meanwhile, Apple’s design for its cameras remains reminiscent of a stovetop with two burners. The Galaxy S21 has rounded sides for added comfort while holding the phone without a case, and the iPhone 13 has flat sides that look and feel more premium.

The S21 is slightly larger than the iPhone 13, thanks to its bigger screen, and it features a USB-C port for charging over the iPhone’s Lightning connector. Both devices have standard SIM card slots and stereo speakers, and neither has a headphone jack. They also both offer IP68 water and dust resistance, so you can use them in the rain with no issue.

Neither of these phones is designed for those who like compact phones, though. Similarly, they also don’t have the biggest screens you’ll find on the market. They’re both sort of Goldilocks options for those who want a phone they can handle with one hand that doesn’t feel too cramped.

The same can be said about the screens, which are both terrific. Samsung uses a 6.2-inch Dynamic AMOLED 2X display on the Galaxy S21, while the iPhone 13 gets a 6.1-inch Super Retina XDR panel.

In terms of usable screen area, you clearly get more with the S21. Not only is it slightly larger at 6.2 inches over 6.1, but you also don’t get a notch, which covers a chunk of the display. This means you’ll see more of a video when it’s presented full screen, and it’ll be less of an eyesore for those who can’t stand Apple’s notch.

Samsung’s screen is also better in terms of quality. It offers a 120Hz refresh rate, which increases the fluidity of everything you see on the screen, whether it be animations or simple scrolling on social media. Meanwhile, the iPhone 13 only has a 60Hz refresh rate, and you’ll need to go Pro to get 120Hz.

Many people choose the iPhone 13’s display due to its more subdued nature when it comes to color reproduction, while others prefer Samsung’s more vibrant take on saturation. This is one of those situations where it’s helpful to visit a store and look at the two devices side by side to see which one you like more. It’s a very subjective opinion.

When it comes to performance, both phones offer enough horsepower to handle just about anything you throw at them. However, if you want the most power you can get in a smartphone, the iPhone 13 is your best option.

The Galaxy S21 comes with a Snapdragon 888 processor, which, for 2021, has been the fastest processor for Android smartphones. It’s very powerful and offers plenty of advancements for AI and camera tech. Apple manages to beat whatever the latest and greatest is from Snapdragon in the smartphone world with its own A-series chip every year. And the A15 Bionic in the iPhone 13 is no exception.

This processor is beyond powerful, benchmarking well above the Snapdragon 888 and maintaining a status quo in the industry for being the fastest smartphone chip available. It also offers plenty of headroom for the future so it won’t slow down over time. This lets Apple continue to provide software updates to the iPhone 13 well after the S21 has stopped receiving updates.

As far as storage is concerned, it’s a bit of a mixed bag. Apple lets you configure its device with up to 512GB of storage, while the S21 only gets up to 256GB. In addition, there’s no microSD card expansion on either device.

Overall, those who want the best performance out of their next smartphone should be looking at the iPhone simply due to the fact its processor is just so powerful. Samsung might have an edge in RAM, but it’s not enough to topple the everyday performance you’ll get out of the iPhone compared to the S21.

Battery life: Which can last longer?

On paper, you’d think the Galaxy S21 would beat the iPhone 13 to a pulp in the battery life department, but the conversation is a bit more complicated than that. While the S21’s 4,000mAh battery is much larger than the 3,240mAh cell in the iPhone 13, Apple manages to balance power and efficiency extremely well. This gives the iPhone the same level of endurance as the S21, which is to say it’ll last you a full day with no issue.

On the other hand, the S21 beats the iPhone 13 when it comes to charging. The iPhone 13 is only capable of up to 20 watts of wired charging, whereas the S21 can be used with a 25-watt wired charger. This will juice up your device much quicker, so if you care about recharge speeds, get the S21.

For those curious, both devices max out at 15-watt wireless charging.

The camera section of any smartphone comparison can be tricky to pin down, but we’ll make this an easy one: While the Galaxy S21 has a great camera system, the iPhone 13 has an overall better camera system.

Samsung’s triple-lens system on the back of the S21 is plenty capable, of its 12MP main lens capturing crisp, clear photos and decent video. It also has a 12MP ultrawide lens for expansive landscape photography, while the 64MP telephoto sensor aids in zoom quality for up to 3x hybrid zoom.

The iPhone 13 takes a more conservative approach to its camera hardware, utilizing a main 12MP sensor and an ultrawide 12MP lens. Both are capable of the same kinds of photography as the S21, minus the added zoom functionality.

However, where the iPhone edges out the S21 is in overall quality. Apple’s photo science kicks out more balanced and lifelike photographs over Samsung, which tends to oversaturate scenes more often than not. In addition, Apple’s iPhone video quality has always led the industry, and that hasn’t changed with the iPhone 13.

Some might prefer Samsung’s more vibrant photos and other camera tricks hidden in the S21’s software, but for those who want one of the most reliable cameras on the market, there’s no beating the iPhone 13.

Which one should you have?

These phones are plenty different from each other, and they each share their own strengths and weaknesses. The Galaxy S21 offers a much nicer screen and fancier specs, while the iPhone has better performance and a more reliable camera system.

At the end of the day, it’s hard to pinpoint which one is truly better than the other. We’re inclined to say the iPhone 13 takes the cake, thanks to its performance and cameras, but those who might value faster charging and a nicer screen will enjoy the Galaxy S21.

It’s up to you and your personal preferences if you’re debating whether to buy the iPhone or the S21. Both are great devices, and you’ll be pleased with either of them. Just keep in mind what you value in a smartphone when making your decision. 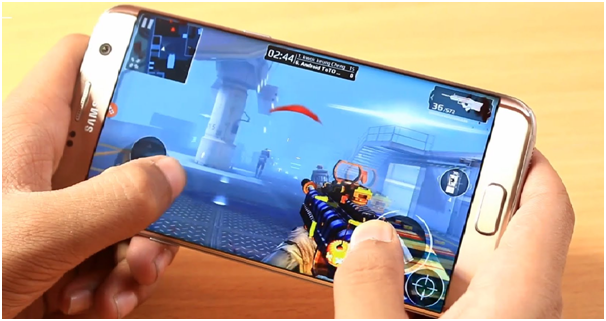 Top 7 Android Phablets to Own this Year

Apps for Informing a User’s Phone Usage On Android Phones