The single character game or action games are now gradually diminishing and are being replaced by RPG (role-playing game). RPG games are the first genres to hit the Android industry, but its craze started becoming visible lately.

Role-playing games are a story-based experience that is loaded with many aspects like the wonderful storyline, playing storylines, crafting characters, and the game is a mix of many other characters that add the required thrill in the game.

Here, I have roundup the best RPG Android games that will bring up some new colors to your gaming world.

The Fire Emblem series has been ruling the mobile gaming from the past 25 years and the craze is still on. The action-packed RPG game is customized for touch screens and has created all the characters from the Fire Emblem universe.

You’ll start your journey from an ongoing battle where there will be existing heroes and many other battle-tested heroes from the universe of the Fire Emblem.

It has more than 700 stories and with every successful completion of the stage, you get the reward of Orbs, which you can use to summon heroes.

It is a heroic game popular among gamers across the world and finally, the game is launched for mobile users as well. But to maintain the aura of the game, the RPG game offers the same experience as that of the original.

To make it happen, the game size is large and requires some patience to download. Once downloaded, the Star Wars game can be fully enjoyed on the mobile device.

The story is about the Galactic Empire, who’s Jedi Knights are put to fight against the Sith and the player is the last hope of the Jedi order. With all skills, as a player, you have to set free the kingdom from the clutches of the dark side.

This game has unique characters, creatures, vehicles, and peculiar planets. There are Star Wars characters like Twi’leks, Droids, and Wookiees, which bring the full essence of the epic space opera.

Eternium is a nice classic and is one of the best RPG games for Android. The RPG game is easy to play with controls like “tap to move” and “swipe to cast,” making this game a perfect breeze.

Its tap-to-move control is its vintage-like point-and-click Action RPG game and is better than thumbsticks any day.

You can obtain the best things by playing and not by paying which makes this game unique. Some features like real-time multiplayer, town portal and a fourth world were added later on to this game.

This RPG Android game is known for its dramatic environment. The Tree of Mana is the major focus in this whole game that stands atop Mt. Illusia, which survives on the celestial aether. You will get the eternal power of Dark Lord of Glaive if you lay your hands on the trunk.

Being a gladiator you along with your companions need to combat the beasts to amuse the Dark Lord. With so much impulse and activities, the action RPG game is a delight to play.

The Banner Saga is a tactical RPG fight game where choices made throughout the play impact the gameplay and the outcome of the play.

In the game, as a leader, you need to save people from the wrath of enemy clans and vicious Drudge soldiers.

It’s a 2D animation RPG game that has combat sequences and soundtracks composed by the Austin Wintory, the Grammy-nominated composer.

It is an interactive thrill RPG game designed by the co-founder of Lionhead Studios and Fighting Fantasy and Games Workshop, Steve Jackson.

Here you are constantly bombarded with a cursed Citadel of monsters, magic, and traps. You have to fight creatures, cheat death, explore places, and cast spells to shape the story.

Chaos Rings was released in 2010 and since then, the RPG series game is popular. It came up with Chaos Rings II in 2012 as a sequel.

Chaos Rings III again refined the gaming experience and is packed with a deep storyline, and high-quality soundtrack. It has an extraordinary soundtrack which was downloaded over 1.1 million times.

In a floating continent high in the sky, you aim to fulfill your dreams and desires. You also get to see unexplored lands, monsters, hidden treasures, and more.

Above-listed are some of the most popular and adventurous RPG games that are going to rule the roost in 2020. 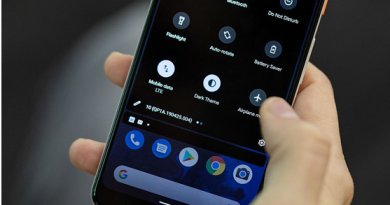 How to enable Dark theme in Android 10 mobiles?